Visit Your NJ Garden Center to Get Rid of Japanese Beetles 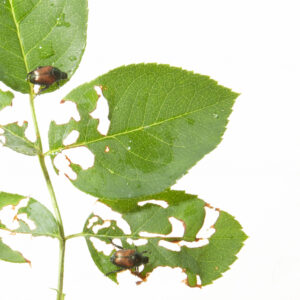 If you grew up in the Midwest, the Mid-Atlantic or just about anywhere along the East Coast of the United States, you probably still have early-summer memories of capturing dozens of the copper-and-green bugs in your backyard with slippery Japanese beetle traps. As an adult with a yard full of lovely foliage, though, or perhaps a backyard garden or a rose bush, these miniature Asian invaders aren’t quite as much fun.

Where Do Japanese Beetles Come From?

The bugs are believed to have first escaped Japan and entered the U.S. in 1916. It’s thought that they stowed away in a shipment of Japanese flowers.

Because of natural predators that are still present in Japan, the beetles aren’t much of a problem there. Yet here in the West, it’s a much different story: Once the clear and warm weather of June or early July approaches, Japanese beetles gather in clusters to feed on your lawn, your leaves, and even plant species ranging from hibiscus and raspberries to sassafras and peaches.

If you don’t manage to get their population under control as early in the season as possible, it won’t be long before your beloved garden will be literally straining under the weight of these pests, which are capable of eating their way through shrubbery in an incredibly brief amount of time.

But what are the best ways to accomplish the goal of reining them in?

Perhaps not surprisingly, there’s a bit of a debate when it comes to the proper way to get rid of the destructive Japanese beetle. Beetle trap stands have been popular for decades, and you should be able to find an affordable kit at your favorite NJ garden center. Here are few other alternatives:

Pick ‘em: Probably the easiest way to kill these little critters is to simply pluck them off your plants by hand and drop them in a bucket of soapy water, where they will quickly drown. Because the presence of beetles attracts more beetles, removing as many as possible from your yard or garden will go a long way toward reducing the overall problem. And because beetles that arrive in your yard from elsewhere will flee after picking up the scent of any dead beetles in the general vicinity, you’ll want to leave that bucket of dead bugs out in the open, next to the foliage they seem most attracted to.

Spray ‘em: Pyrethrin-based insecticide is also popular, especially with homeowners who have large and expensive gardens they’ve invested considerable time into. Visit your favorite New Jersey garden center to purchase a spray, and be sure to let an employee know that you need an insecticide that will work on Japanese beetles.

Trap ‘em: If you do decide to use a trap, bear in mind that you’ll want to place it far away from your garden. That’s because the trap’s scent will actually attract Japanese beetles to your yard; any beetles not caught in the trap will likely end up enjoying lunch in your garden.

Interrupt ‘em: Spraying your yard and garden with grubicide won’t do much (if anything) to reduce your Japanese beetle population this season. But it will kill the grubs that would otherwise turn into adult beetles in a year’s time. Ask for a grubicide at your local home and garden center, and picky up some Milky Spore while you’re at it. Once Milky Spore fully works its way into your garden’s soil, which will take about a year, its effectiveness at grub-killing will last for at least a decade.

With their striking, metallic-green bodies and copper-brown wings, we frankly find the Japanese beetle to be a rather lovely creature. But considering that they travel in huge packs and literally decimate plants and flowers, they do have to be dealt with somehow. We hope this article gave you at least a few good ideas about how to accomplish that.

For gardening supplies of all kind—including all manner of fertilizers and pest control—come see us at Mendham Garden Center. We have New Jersey locations on Mendham, Chester and Annandale.