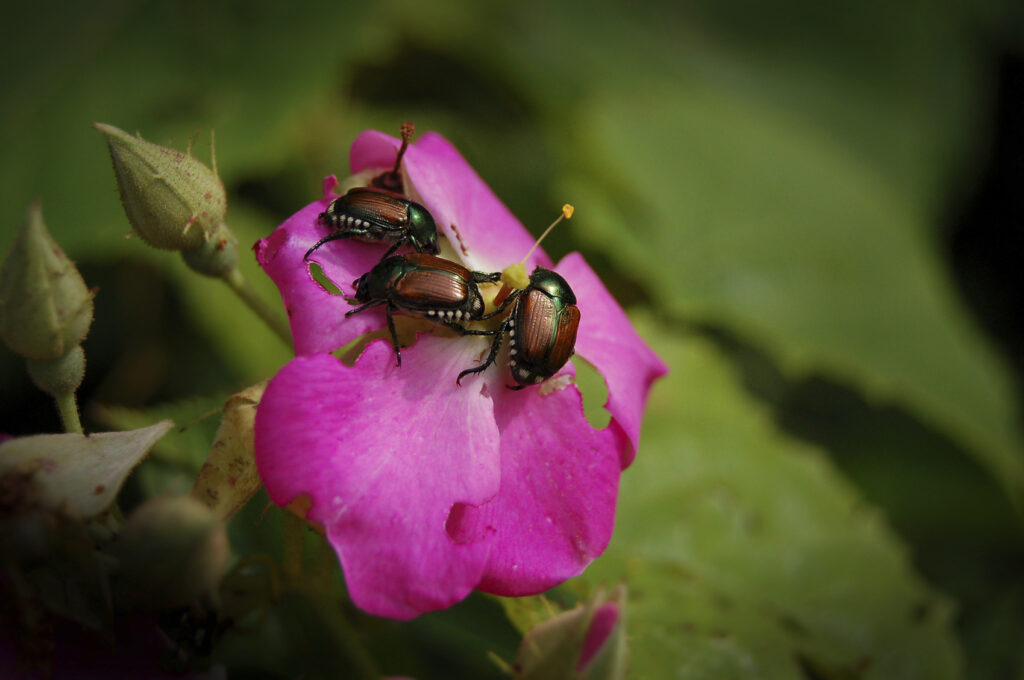 Here’s an anniversary that’s not exactly worth celebrating: 2016 marks 100 years since the Japanese beetle was first discovered in America.

“Seven years ago, concealed in imported azalea roots, an unsuspected grub entered this country from Japan. The destination of the roots was Burlington County, New Jersey. They got there and the grub came with them. It burrowed in the ground and hatched the Japanese beetle that already has done much damage and threatens to do much more.”

A century later, the Japanese beetle is still a major gardening headache. As the newspaper account put it, “whatever green thing that comes in its way is grist for its insatiable devouring mill.”

Let’s take a look at some of the things you can do to get rid of these pests.

Just pluck them off your plants

This is probably the easiest method to kill Japanese beetles: pull them off your plants by hand, and drop them in a bucket of soapy water. Beetles attract more beetles, so eliminating as many as you can from your garden will go a long way to reducing the overall problem.

By the same token, the presence of dead beetles will keep live ones away, so leave the bucket out in the open, close to the plants that seemed to attract the beetles the most.

Check out your nearby garden center to purchase sprays such as Pyrethin-based insecticides. Talk to an employee for advice on which pesticide will work best on Japanese beetles. We offer organic pest control options to keep your garden beetle-free without damaging your lawn and garden.

Trapping Japanese beetles can be tricky. If you use a trap, be sure to place it far from your garden. The trap’s scent will draw the insects to your yard, but any that aren’t caught in the trap can make their way to your plants to feed.

Get them while they’re young

Grubicide won’t stop this year’s crop of Japanese beetles from feasting on your plants. But it will prevent future generations of the beetle from appearing next year. You may also want to invest in some Milky Spore. It’s a natural bacterium that kills Japanese beetle grubs. When a grub dies and decomposes, it releases billions of new spores into the soil to infect and eventually kill other grubs. The effects of Milky Spore last for at least a decade.

If you have questions about pest control options for your lawn and garden, contact Mendham Garden Center.

We haven’t been in New Jersey as long as the Japanese beetle, but after 56 years, we have been in business long enough to know what’s best for your garden.